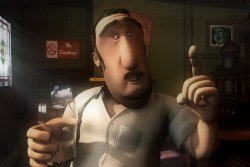 A tourist walks into a Dublin pub looking for directions and encounters Ding Dong Denny Oï¿½Reilly at the bar who insists on telling him the "real" history of Ireland over a number of pints. As the stories unfold, we hear Ding Dong's delusional take on events that shaped our nation.

A graduate of Ballyfermot senior college, Cathal Gaffney established Brown Bag Films with fellow animation director, Darragh O'Connell in 1994. Cathal has produced as multitude of commercials, short films and television series. In 2002, Cathal was nominated for an Academy Award as the director of the short film Give Up Yer Aul Sins.