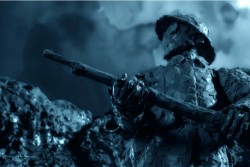 The night before the offensive, a soldier hides in the bottom of an underground. Outside, the war shakes the ground and the man prepares himself with the inescapable... In this stop motion animated film, the bodies of the soldiers become again matter, alloy of earth and steel, curdled in death for eternity.

Bruno Collet was born in 1965 in Saint-Brieuc, France. After receiving his degree at the Fine Arts Academy at Rennes, he worked on sculpture and 3D objects exhibitions. His interest in animation developed while he worked for short films and video clips as a decorator. "Le Dos au Mur", his first animation short was produced in 2001 and awarded in International Critic's Week in Cannes.