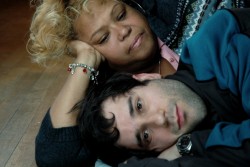 CENTER OF THE UNIVERSE

Haunted by memories of a broken relationship, Oscar decides to join a cuddle group. Here he meets Aida, a woman determined to solve his problems.

Jarrah Gurrie is an Australian film-maker currently based in New York City. He grew up on the Victorian surfcoast before moving to Melbourne to attend Art School. Jarrah is an award winner at several short film festivals - his films to date have had a high presence on the International Gay and Lesbian Film Festival circuit. His last short, "Cabalerno "was featured by MTV/Logo Television's The Click List: Best in Short Film and is also included on the Boys Briefs 3 (USA) compilation and Courts Mai Gay 12 in France. Jarrah is currently completing his Graduate studies in Film at NYU's Tisch School of the Arts. He is also working on music videos and developing feature length projects.

Director Jarrah Gurrie & Producer Sally Kewayosh will be available for Q&A after the screening.