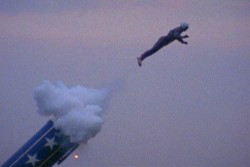 THE LONELY BLISS OF THE CANNONBALL LUKE

A human cannonball named Luke returns home to a small town in Pennsylvania to launch himself back into the lives of his ex-flame Hannah and her daughter Elise. Culminating in a jaw-dropping finale, the film is a bittersweet ode to a man who's only grounded when he's in the sky (featuring stunt work by world-record-holding human cannonball David Smith Sr.).

Levi Abrino was raised with four adopted siblings on a dairy farm in rural Central Pennsylvania. Leaving the farm for Penn State University, he earned degrees in Geography and Filmmaking, which he used to land a job on the teller line at a rural bank. Here, his duties included cashing checks, taking deposits, and playing the crook in Friday-morning bank robbery drills. Levi is currently an MFA candidate at New York University, where he is developing a feature film. His previous shorts "Burying Dvorak" and "I Ran with a Gray Ghost" have screened at numerous festival including Slamdance, Clermont-Ferrand and had a theatrical run at the IFC Center in New York.

Director Levi Abrino will be available for Q&A after the screening.