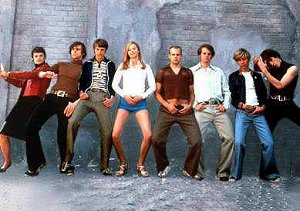 Micha lives in the German Democratic Republic. His apartment is cramped, the neighbor works for the secret police and the Soviet Union is big brother. The rest of the world is the enemy and the Berlin Wall is actually a safeguard against fascists. But Wall or no Wall, it's the 70's: bell bottoms, the Stones, getting into trouble and dodging the cops are all part of daily life. When Micha's passions are aroused by the stunning Miriam, his spirit soars to blissful heights and the rest of the world fades. No sacrifice is too great, no punishment too cruel - if only he can get her to notice him. His efforts are hilarious and heartbreaking, and as we travel on this long journey with him we realize that "East" is not all it's cracked up to be. For Micha and his gang, it's the best time of their lives.

Born in Quedlinburg in the German Democratic Republic in 1959, Leander Haussmann took up studies at the Ernst Busch College of Dramatic Art in Berlin in 1982. He appeared on stage in Gera, Parchim and Weimar, where he also worked as a director. In 1991 the magazine Theater Heute nominated him Germany's best young up-and-coming director. Four years later he took over the directorship of the Schauspielhaus in Bochum. Sonnenallee is Haussmann's debut as a feature film director.