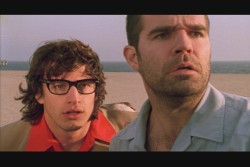 NATURE OF THE BEAST

Darryl is an ex-con fresh out of the joint and looking to stay out of trouble. Suddenly his old pal Leo shows up, on the run and needing a place to crash. Soon enough, Darryl's dealing with a marauding pink Walrus looking for payback-- and it's up to the increasingly berserk Leo to bail him out. Nature of the Beast is a Psychedelic Comedy starring Rob Delaney and Saturday Night Live's Andy Samberg.

Nate Pommer is a Brooklyn-based filmmaker. Past shorts include Monkey Vs. Robot!!, Don't Trust Whitey, and Eye Am Your Eye, as well as music videos for James Kochalka Superstar, Galactic, and Gogol Bordello. His work has screened on MTV and at Slamdance, NY Underground Film Fest, and many more festivals worldwide. His latest film, "Nature of the Beast" won best short at the 2007 Coney Island Film Festival.

Director Nate Pommer will be available for Q&A after the screenings.