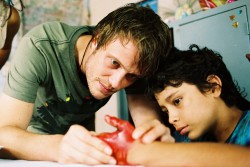 Seeking to escape suburban boredom, 26-year-old med student Marc travels to Cali, Colombia, on an exchange. No sooner has he arrived in the hospital than he is thrust into the operating room, as if in a war zone. The beautiful cartel capital of Cali is a battleground, which his conservative host family tries to keep Marc well away from. But Marc finds himself drawn to the dangerous life in the favela of Siloé, a picturesque neighborhood of teenage hired assassins. There, he meets kiosk owner Wanda, a charming alcoholic, and little Pavito, a boy who supplies him with coke. Soon Marc is being pulled into the fast and furious life of the favelas, which brings him into conflict with his hospital and host family. He gets thrown out and takes up residence in Wanda's kiosk, already heavily in love with the beautiful owner. When gang leader El Juez, the »Judge«, wants Marc to become his personal doctor, Marc has to make a choice. Juez is on a bloody crusade for control of the town, and Marc decides he has to try and stop him. Shot on location in Cali.

Tom Schreiber (1969, Freising) studied film making at the Academy of Media Arts, Cologne. After working as Assistant director for a few years, in 2005 Tom co-founded the production company 58Filme.