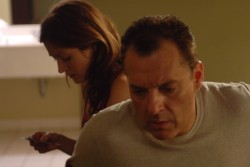 Can we make movies thoughtful and quieter and still make them riveting? That's the question at the heart of Lullaby. This beautifully shot contemporary film noir takes the genre and spins it off into subtle and meditative directions. Co-written by the creator of The Road to Perdition and starring Tom Sizemore (Saving Private Ryan, Heat) and Sasha Alexander (NCIS, daughter-in-law of Sophia Loren), some have deemed Lullaby the "sweet hitman movie". The delicate performances and the alarming action make for a great date night. And its atmospheric, brooding tone creates an extremely nervy ride. It's more emotional than most films in the genre. And while there's a good share of violence, what really drives Lullaby is character.

Jeffrey Goodman decided he wanted to make films while living in France. He ended up raising all the money for Lullaby himself, selling the film in $50,000 units to 48 private investors in his hometown of Shreveport, Louisiana. He believed it would take this level of freedom to make a movie that he felt was slightly different than most things currently being made. Now Jeffrey has taken things a step further, making the decision to self-release the film himself. Jeffrey chronicles his journey of self-distribution on his weekly blog for MovieMaker magazine

Director Jeffrey Goodman will be available for Q&A after the screenings.