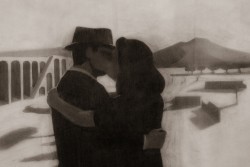 A woman arrives in Italy to meet a lover. The man, a filmmaker fascinated by his country, guides her through the places he likes. When he has to leave to film fishermen at work, the woman stays in Naples and continues her walk-through. But in her loneliness, she feels oppressed by what surrounds her.

Nicolas Liguori graduated of the ESAAT School of Animation (Roubaix - France). He started as Assistant Animator on "La Prophetie des Grenouilles" (Feature film - Prod. Folimage) and has since worked on various short films including "Signes de vie" by Arnaud Demuynck, "Chahut" by Gilles Cuvelier, and "Marottes" by Benoit Razy. His first professional short, "La Svedese", is a tribute to Roberto Rossellini and Ingrid Bergman.