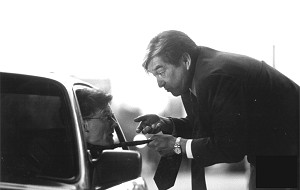 George has a gun, Jan has a butcher's knife and Murray and Stick are armed with attitude. The four main characters of "Bad Money" are ready to do whatever it takes to survive financial ruin. It's a jungle where children carry cell phones, eating disorders are elegant and domestic animals go from pet to plate. Welcome to an economy where above the knee amputations mean better welfare benefits, and having a relative in the sex industry might be just the "in" you need to start a new career. Get ready to rodeo, because in bankruptcy, there are no bad people, just bad money.

Can all social relationships be expressed in monetary terms? Probably not, but there sure is a lot of financial subtext in our lives. Under the surface of almost every exchange lies the subtle and sometimes not so subtle tug of commercial gain. Are nice average people capable of succumbing to these undercurrents, capable of doing harm in the name of so-called survival? They say it's the quiet ones you have to look out for; perhaps the similar is true with nice average people. Regardless, it is no laughing matter.