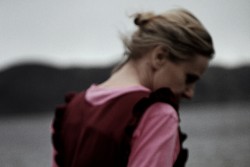 A young man arrives at a hotel on a small island. He contacts an elderly woman who works at the hotel as a chambermaid. It proves that they have a common past, and that they handle this knowledge in different ways.

Ann Holmgren is Swedish and Saami and grew up in the north of Sweden. She is an educated photographer and has also studied psychology, sociology, ethics and creative writing. She has made several short films and published two novels. She graduated at the Norwegian Film School June 2008 and "The Chambermaid" is her graduation film.

Director Ann Holmgren will be available for Q&A after the screenings.