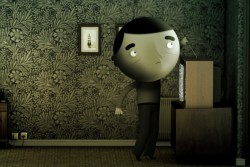 Having been struck by a 150-ton meteorite, Henry has to adapt to living 91cm precisely from himself...

Since graduating from Paris' Arts Décoratifs in 1999 Jeremy Clapin has worked as a graphic artist, illustrator for various publishers, and as an indie advert director. In 2004, he directed his 1st animated short, "A Backbone Tale", which featured in over 60 festivals worldwide, and won more than 15 prizes. "Skhizein" is his second film.