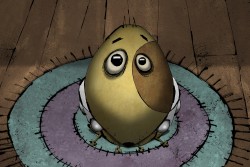 Steve Baker has been making films since the turn of the century. In that short amount of time he has written and directed multi-award winning short films that have traveled the world over. In 2007 Steve took out first prize at the world's largest short film festival - Tropfest, with his bittersweet film - "An Imaginary Life", the first animated film to ever win. Last year Steve finished his latest short - "Dog With Electric Collar", which opened the prestigious Sydney International Film Festival, and won the AFI for Best Short Animated Film.