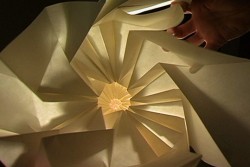 The film chronicles ten fine artists and eccentric scientists who have devoted their lives to the unlikely medium of modern origami. Through their determination and passion to reinterpret the world in paper, they bring forth a fascinating mix of sensibilities towards art, perception, creativity and meaning. The film opens intimately with three of the world's best paperfolders - a former sculptor outside Paris folding caricatures that rival the figures of Daumier and Picasso; a hyper-realist who walked away from a NASA physics career to challenge the physics of a folded square; and a papermaker who folds impressionistic models out of the very same paper he makes from scratch. As the film progresses, the artists become less conventional, and the post-modern concepts of abstraction, minimalism, deconstruction, process, and empiricism take root - mirroring 20th century art itself. Abstract artists emerge with a greater emphasis on process and concept, rattling the fundamental roots of realism that have long dominated traditional origami. Eventually science emerges as another front in the exploration of origami - featuring advanced mathematicians as well as a remarkable researcher from the Artificial Intelligence Lab at MIT and recent winner of the MacArthur 'Genius' Award for his theoretical origami research. While debates arise on issues of technique, symbolism and purpose, the film ultimately culminates with the idea that art and science are but two different interpretations of the very same world around us - one that we all struggle to understand and honor. The medium of paperfolding - a blank, uncut square - emerges as a resounding metaphor for the creative potential and transformation of us all.

Vanessa Gould has studied a mix of science, art, film, and design over the past two decades, including architecture and astrophysics at Columbia and music at the New England Conservatory. Between the Folds was a project born of great admiration for the artists and scientists working in paper, and the belief that their remarkable work should be documented. She is also a pianist and painter. Between The Folds has won numerous Best Documentary Awards and Audience Awards. Portions of the film have also been installed in museums and gallery exhibitions in the US and Europe.