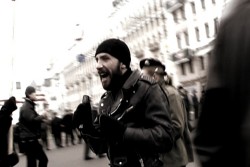 THE REVOLUTION THAT WASN'T

Russia, 2007. Exactly a year before the next presidential elections. The opposition is set to act decisively and take power. Anatoly and Andrei are veteran revolutionaries. Since 1997, they have been members of a banned political organization. This film follows them over the course of one year, through the presidential elections. For the central figures of this film, it is a year of challenge and the start of a new life. This is a story about individuals within the framework of a general political fever, a personal story within a historical narrative. Russia has a fever... nothing new there. But this time the fever looks like this.

Aliona Polunina (1977) is a member of the guild of directors in Russia. She graduated as a documentary filmmaker from Moscow's higher directing and scriptwriting courses in 2004. Aliona graduated from VGIK, faculty of film critics in 2000 and Moscow Academical Art School of Surikov's Institute, faculty of architecture and design in 1996.