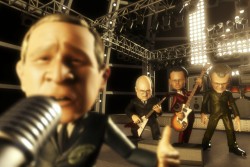 A Superhero team 'Unbelievable4' takes preemptive action against hundreds of Evil Spaceships, and ends up with an unexpected result.

Sukwon Shin received his Master's Degree from the School of Visual Arts where he completed his final thesis project, an animated short film entitled "Rock the World". Sukwon's creativity and skill earned him the 31st Student Academy Award for this piece which was also selected for inclusion in the Siggraph 2004 Electronic Theater. In 2007, his passion for animation film making led him to start working on the second short film "Unbelievable Four" that lasted for more than 2years of work involving strong collaboration with co-director/lighter In Pyo Hong and Art director Choon Hoe Kim. Fortunately, their film has been selected for a number of prestigious film festivals worldwide and still receiving overwhelming positive response from the audience.