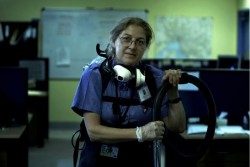 LESSONS FROM THE NIGHT

As dusk approaches and workers stream out of the city, Maia, a Bulgarian immigrant, is about to begin her day. She reflects on life, work and toilet bowls as she goes about her nightly cleaning round through silent, empty spaces.

After graduating with a Bachelor of Arts in Screen Studies and making several fiction shorts, Adrian Francis travelled extensively in Europe and Asia and spent 4 years teaching English in Tokyo. He returned to Australia to complete a Graduate Diploma in Documentary in 2006, where he won student awards for his documentary short, SOFT WORDS. His films have screened at international festivals including Melbourne International Film Festival, NewFest New York LGBT Film Festival and Montreal Lesbian & Gay Film Festival. LESSONS FROM THE NIGHT is funded through Open Channel's 2008 Raw Nerve programme for emerging filmmakers. Adrian is currently in Tokyo developing his next documentary.