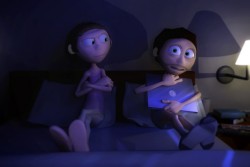 The story of Mandy and Frank, a married couple that's been having some differences when its time to sleep.

Luis Carlos Uribe was born in the United States and moved to Bogota, Colombia at an early age. He began his studies at the Colegio Anglo Colombiano and followed by studying Industrial Design at the Pontificia Universidad Javeriana where he discovered his passion for Animation and Computer Graphics. In 2009 graduated from AnimationMentor where he earned a Associates Degree in Character Animation. Luis Carlos currently works as a freelance Character Animator. He has worked in projects such as the award winning short film "In August", the game cinematics for Ice Age 3 and his short film "Go To Sleep".