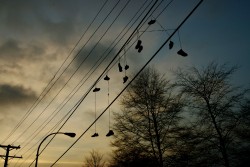 THE MYSTERY OF FLYING KICKS

Murder, sex, drugs, art, politics... sneakers hanging on telephone lines have become a powerful urban symbol, inspiring genesis theories both hilarious and sinister. In an effort to get to the truth once and for all we asked the people of earth to help us solve this mystery. Using an on-line call out and a phone message bank, this documentary was made entirely from donated photographs, phoned-in theories, video, vlogs, and animation. The Mystery of Flying Kicks is the result of a unique digital collaboration between the filmmakers and the international public.

Matthew Bate is documentary filmmaker based in South Australia. His 2006 film What The Future Sounded Like is a visually and sonically experimental exploration into the genesis of electronic music. In 2007 Matt directed the first co-production between SBS Australia and Al Jazeera on the film The Mayor, The Artist, The Farmer and His Wife, and has previously directed episodes of the hit SBS series Risking It All. Matt is in development on a film about legendary New York street photographer Martha Cooper and is currently in production on his first feature-length documentary about the infamous audio-verite recordings SHUT UP LITTLE MAN!