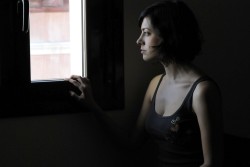 All women are Marisa, but Marisa is just one woman.

Nacho Vigalondo's short film "7.35 In The Morning", which he wrote, directed and starred in, not only won more than 60 national and international awards but was also nominated as best short film by the European Film Academy and the Oscar Academy Awards in Hollywood. His first feature film, "Timecrimes", is a sci-fi story about time travel. He is currently combining his film projects with the production of advertisements and various screenwriting and acting tasks for theatre, radio and television.