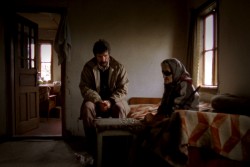 The story takes place during the civil war in Bosnia. It follows Marko, a middle-aged peasant, who decides to plow his land at the disputed border on the day a peace agreement is announced. While scattered and "friendly" gunfire echoes from both sides, Marko's simple human action brings a moment of harmony to a land torn apart by the madness of this war...

Mirko Rucnov, who is originally from Bosnia, graduated with Honors from Columbia University Graduate Film School in May 2009. "First day of Peace" is his thesis film. Currently, he is preparing the ground for his first feature film, "Mother".

Producer Sonja Rucnov and Director Mirko Rucnov will be available for Q&A after the screenings.