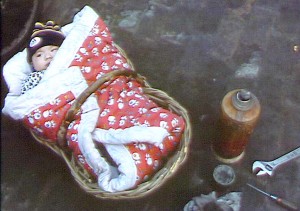 THE ORPHAN OF ANYANG

This film is set in the ancient city of Anyang, in Henan Province. A prostitute from China's Northeast(Manchuria), desperate and unable to make ends meet, abandons her baby. An unemployed factory worker decides to take the child in order to make 200 yuan monthly in child support promised by the mother. A local gangster wants to take the baby when he learns that he is dying, hoping to have a descendant. Three different lives, three different fates, each with their different backgrounds and experiences, try to survive at the bottom rung of Chinese society.

Wang Chao, was born in Nanjin, China in 1964. He graduated from the Beijing Film Academy in 1994. From 1995 to 1998, he was assistant to director Chen Kaige (Farewell my Concubine, The Emperor and the Assassin) and served as assistant director on the Emperor and the Assassin. During this time, he often wrote the critique of the foreign film for the newspapers and periodical. Between 1996 and 2001, he published three short stories and one novella. The film The Orphan of Anyang is based on one of those stories. From December 2000 to March 2001, he shot and edited The Orphan of Anyang, him first feature film.