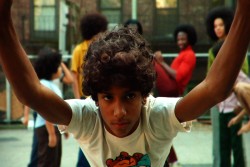 MOSQUITO is about humiliation and redemption - the coming of age story of Cesar, a 13-year old Dominican boy whose awkward bravado and fanciful imagination have earned him the nickname Mosquito. On a memorable Halloween night in 1974, Cesar fights to win the respect of his teenage tormentors.

First-time writer/director Jeremy Engle, born and raised in NYC, has been a public school teacher and educator for more than 10 years, teaching history and documentary video making to teenagers and adults. He has worked with schools and teachers across the country to develop more interactive and youth-centered approaches to learning. He recently completed the feature-length screenplay HALF LIFE - which is also told through the eyes of young kids growing up in NYC in the 1970's.

Director Jeremy Engle and young cast of actors will be available for Q&A after the screenings.