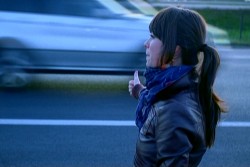 Naissances examines an ephemeral connection between strangers and the false hope borne of living in a moment that does and does not belong to you.

Anne Émond is a Montreal-based writer and filmmaker. In the last five years, she has written and directed six short films. At the 2009 Rendez-vous du cinéma québécois (Montreal), she was presented with the Best Direction Coop Vidéo Award for her previous short film L'Ordre des Choses. She is currently working on her first feature film Nuit # 1.

NAISSANCES was nominated in the CANADA'S TOP TEN 2009 (BEST CANADIAN SHORT FILMS SECTION) "Anne Émond has created a perfect short film. It's masterfully rendered and seamlessly directed and from opening frame to closing image you can't help but feel you're in the hands of a master storyteller. The artistry seems so simple, so effortless... but like a perfect short story or a heart-broken ballad you can play on endless repeat, you just don't want it to end. More please. - Shane Belcourt (Panel Statement)

Director Anne Émond will be available for Q&A after the screenings.