Latest News: Cost of a Soul in select AMC theaters nationwide MAY 20, 2011. 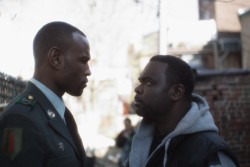 COST OF A SOUL

Cost of a Soul captures the struggle of two wounded veterans who return home from Iraq to find themselves trapped in the war-zone of the slum neighborhood they joined the military to escape. This gritty urban drama about Irish hitmen facing off against African-American gangsters is set on the mean streets of Philadelphia. Cost of a Soul is a cathartic, stark examination of the endless cycle of violence and retribution.

Writer/Director Sean Kirkpatrick was born and raised just outside of Philadelphia, PA. He is a Film Graduate of the Pennsylvania State University and a true artist in every sense. Cost of a Soul is Sean's feature film directorial debut.

Director Sean Kirkpatrick, Producer Edward J. Eberwine III, and Cast & Crew will be available for Q&A after the screenings.