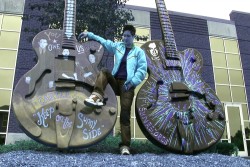 (10 lat do Nashville)
US Premiere

Iza is a 33 year-old cleaning lady in a Polish railway station. Her friend Mariusz owns a railway toilet. Together, they dream of traveling to America, to Manhattan and then to Nashville, to see "country music USA." Iza loves country music and dreams of performing in front of a Nashville audience. But she and Mariusz do not speak English, their knowledge of foreign countries is weak, and they are comically naive. Yet their optimism and determination is worth admiration. This is a story about dreams, and about two outsiders for whom the journey becomes an important path to self-awareness.

Katarzyna Trzaska studied English literature, performed in amateur theatre and worked for many years in film production before she decided to study film direction at the Krzysztof Kieślowski Faculty of Radio and Television in Katowice. At the school she made short fiction films as well as short documentaries. "10 Years to Nashville" is her documentary debut, and was realized after graduation. Katarzyna is also an author of film and television scripts for the Polish Polsat Television.

Director Katarzyna Trzaska and Producer Agata Rzepka will be available for Q&A after the screenings.