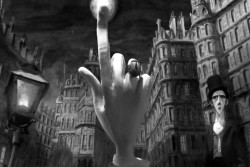 A young man opens the window of his attic room and discovers a lunar landscape which submerges him and threatens to imprison him in an eternal sheet of ice. He closes the window to escape this vision and hears from deep inside his soul the sound of a poem being sung.

Graduated from the ECMA (scrinwriting) and La Poudrière (animation) schools, Christophe Gautry starts working as a 3D animator for the French studio 2D/3D Animations. Soon, he meets the Folimage studio animation team and starts to collaborate as an After Effect animator on various projects. Then he directs the compositing of the TV special "Le Noël de Léon", released later in French theatres on a short film program called "1,2,3 Léon". In 2006, he meets Arnaud Demuynck and takes in charge the graphic design and the codirection of two short films, "La Vita Nuova" and "Le Concile lunatique". Arnaud Demuynck After having written several original scenarios for fiction and animated films, in 2000 with L'Ecluse (The Lock) Arnaud Demuynck set out to direct a "choreographic fiction". In 2001 he decided to focus exclusively on animation and directed his "choreographic trilogy": Signs of Life (2004), The Shadow of the Veil (2006) and Breakout (2007). While also pursuing his career as a producer of short films, which he considers as a vital genre for animation (see his catalogue at www.euroanima.net), he began, in 2007, to develop a series, Par les fenêtres (Through the windows), inspired by 19th century poets. In 2008, he co-writes his first full length film Le Vilain Petit Chartreux (The Naughty Little Chartreux), with director Fabrice Luang-Vija. It was again with this other animation enthusiast that he set up www.toondra.com in 2006, the first website entirely devoted to selling short animated films on line.