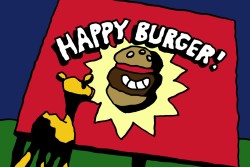 THE COW WHO WANTED TO BE A HAMBURGER

A children's fable about the power of advertising, the meaning of life and ultimately the test of a mother's love.