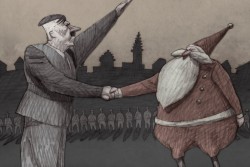 We all think of Santa as "Jolly ole St.Nick". But who knew that he has a dark hidden past that's very un-jolly? This short film uncovers and explores Santa's flirtation with politics and greed.