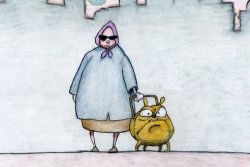 (this film is presented out of competition)

Director Bill Plympton will be available for Q&A after the screening.