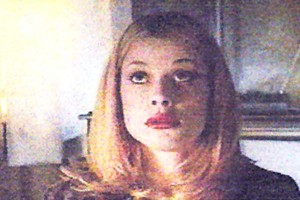 It's been Jed Milligan's lifelong obsession to get out of Jersey and when Connecticutt socialite Ashley deGanay agrees to marry him he's in heaven thinking he's finally going to make his escape to a life of luxury. Then Ashley dumps Jed at the altar and he decides to kill himself. And there he is, poor guy - in the shower - razor poised - when suddenly the toilet flushes and he's interrupted in mid act. Jed rips open the curtain to scream at his roommate Johnny, when suddenly there SHE is - voluptuous, blond, legs for days, Mimi a lyricist whose sole obsession is to get her songs to her favorite crooner, Johnny Pompano, Jr., who's about to make his big come back in Salt Lake City with the Mormon Tabernacle Choir. Right off Jed hates Mimi. She's everything Ashley isn't, and quite a bit more. So, when out of the blue, Jed gets a postcard from Ashley, saying she's run off to Salt Lake City with the humpy Mormon, Steve, it's only at gun point that Jed agrees to take Mimi along on the ride West. And there they are - the unlikely couple - alternately hating each other and charmed by each but above all trying hard to remain true to their obsessions and not to fall in love.

Monty Diamond has worked on feature films of all sizes for over 20 years. As UPM or line producer he's worked with excellent directors including John Schlesinger, Luc Besson, Gillian Armstrong, Jean Jacques Annaud and Bertrand Tavernier. A long-time theater director, Monty studied acting and directing with William Esper, Stella Adler and Bill Hickey. He studied screenwriting with Lewis Cole at Columbia U. and with the great Frank Daniel at USC. His feature script "First Thing Monday" which he co-wrote with Tom Fontana, is based on their award winning short film of the same name. It is to be his next directing project.