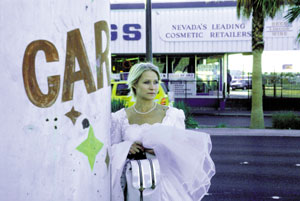 Kamilla, a young Danish girl leaves for Las Vegas to get married. During the ceremony she changes her mind and runs away. She is picked up by Rock, a 40 year-old loner on a motorcycle. A meeting with Rock's aunt sends them in pursuit of Rock's father. During the trip, Rock has been carrying a mysterious package, and shortly before arriving in Seattle, Kamilla discovers what the package contains...

Tómas graduated in editing at the National Film School of Denmark. Has edited Lars Von Trier's Images of Relief and The Element of Crime. Co-writer on Von Trier's Europa (1991) and The Kingdom (1994). Has made video-clips, commercials and documentaries. P.O.V. Point of View is his first feature film.