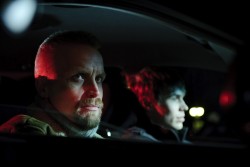 It's Christmas Eve in Helsinki. Young taxi driver Samu is working to escape a family Christmas with his fiancé and baby. At the airport, he picks up a dangerous customer: a Finnish mercenary, Hans, who has returned to Helsinki after 20 years of war. Hans hires Samu to go on a mission with him: to find Laura, the daughter of his recently deceased best friend and brother in arms. The quest to find Laura leads the men around the wintry city, to places and people from Hans's past. As Samu watches Hans confront his past, he begins to open his eyes to his own future. When their mission reaches its end, both of the men's lives are forever changed.

Finnish filmmaker Alli Haapasalo is a New York based director and writer, and a graduate of New York University's Tisch School of the Arts. Ms. Haapasalo has written and directed award-winning fiction and documentary films, which have toured widely at international film festivals. She graduated from the University of Art and Design in Helsinki, Finland in 2003 with her thesis film ILONA - The Girl Who Had No Problems, which received awards at several European film festivals. On Thin Ice is Ms. Haapasalo's thesis film in NYU's graduate film program.

Director Alli Haapasalo will be available for Q&A after the screenings.