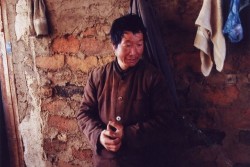 Survival Song is a modern day story of outlaws, poachers, squatters and misfits fighting to survive on the fringes of Chinese society. Han, a college graduate who used to be a forestry worker, struggles to support his wife and children by illegally hunting and trapping wild boar. They live in an abandoned logging camp with no electricity or running water. The government is clearing the area to build a reservoir and corrupt local officials decide to demolish Han's home in the middle of the winter. At the same time, Han's goatherder Xiao Li has returned after running off to the hills with a "crazy woman." Although Xiao Li is a uniquely strange character, he finds a home with this ragtag family of survivors. Survival Song is an excellent addition to the new wave of Chinese documentaries (West of the Tracks; Petition) that have recently made it to the USA.

Yu Guangyi was born in 1961 in China's northeastern Heilongjiang Province. A childhood love of drawing and painting led him to the southern city of Hangzhou, where he attended the China Academy of Art. Upon graduation, he embarked on a successful career as a wood-block print artist. Many of his best-known works are simple, moving, black and white depictions of rural life in the Changbai mountains, where he was born and raised. In 2004, after an absence of nearly two decades, Yu Guangyi returned to these mountains and began a series of documentary films about local residents struggling to maintain their traditional way of life amidst the pressures of urbanization, environmental degradation, social change and outward migration. Thus far, he has completed two films, The Last Lumberjacks (2004) and Survival Song (2008), and is at work on two new projects, tentatively titled Bachelor Mountain and Shaman. Yu Guangyi divides his time between Datong city, Heilongjiang, and a cabin he built in the Changbai mountains.