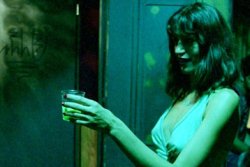 A heartbroken Rio de Janeiro bartender, Luiza, has to suffer the cruelty of watching her former lover and his fiancée celebrate their engagement. As the caïpirinhas flow and the carioca funk blares, Luiza is pushed closer to the edge. Just how far will she go to spend one more night with the man she loves?