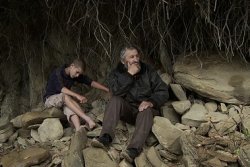 A PIECE OF SUMMER

It is the last days of the summer holidays. A grandfather, who works in the Bieszczady Mountains, awaits the arrival of his grandson. Surrounded by wild nature they try to reach an understanding of each other. The camera keenly and poetically observes, with slow and subtle pace, their developing relationship to one another and to the world that envelopes them.

Marta Minorowicz graduated in 2010 from the Andrzej Wajda Master School of Film Directing. In 2003 she graduated from the History of Theater and English Filology at Jagiellonian University in Krakow, Poland. For more than five years she cooperated with Polish television where she made dozens of social reportages. For Discovery History she scripted and directed the documentary film, The Angel of Death that tells the harrowing story, through interviews with women survivors, of the Nazi doctor Mengele's pseudo-medical experiments.