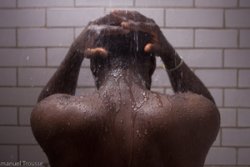 Léopold has an extraordinary body and incredible physical capacities. However, he is an undocumented immigrant in France. He is exploited and downtrodden and cannot fight against this injustice. Because people reject him and because their country is inhospitable to him, Léopold can only rise up. This is the story of his ascension.

After studying Political Sciences, Charles Redon went to the production department of La fémis. As part of his studies he moved into directing. He graduated in 2010 and Jours de colère is his first film.