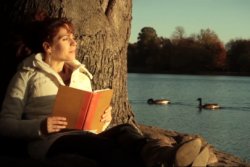 TO BE IN ME

Troubled by the echoes of her past, Veronica isolates herself in a world of solitude, dreaming and longing for the days when she was not afraid. She tries to leave the safety of her home, but is not able to unlock the door that would give way to the real world. A self-destructive desire is threatening her own existence.

Marina Mello is a narrative filmmaker from Brazil, currently based in New York City. In 2006, Marina finished her college in São Paulo and started to work for national and international productions as assistant director, and editor. For commercials, documentaries, and Television. Marina is currently a student from School of Visual's Screenwriting course.

On my recent work, “To be in me,” I could count on a very good crew, like the Italian cinematographer Nicola Raggi, whose work is based on Cinecittá references. The actress is a Canadian named Téana David. She is very used to performing Shakespeare plays and in dramatic films, and puts all of her energy into each role. We worked very well together to create “Veronica,” to show her deepest inner feelings only with her eyes, movements, and different expressions. The music is by Daniel Carlomagno, a famous Brazilian musician and audio producer, who decided to score the film, primarily with piano. He also chose a very deep bass sound that matches perfectly with Veronica’s feelings. I hope that the music will draw the audience into the story.

Director Marina Mello, Cinematographer Nicola Raggi and lead actress Téana David will be available for Q&A after the screening.