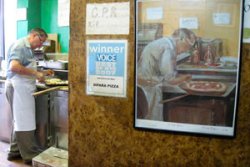 THE BEST THING I EVER DONE

Hailed as the 'godfather of Brooklyn pizza,' for forty-five years Domenico DeMarco, Italian emigre, has been slinging pizzas in his legendary pizzeria, Di Fara. 'The Best Thing I Ever Done gives the audience an interior look into the histories and myths of the pizzeria. Employing five of his children, Dom works tirelessly from morning until night hand crafting every pizza himself while his kids take order and manage the mob of devoted pizza aficionados. 'The Best Thing I Ever Done' is a portrait of DeMarco and his beloved pizzeria, an exploration of his rise to fame and an ode to pizzaioli who take their time to 'make it right.'

M. Emily MacKenzie is a filmmaker with a background in anthropology and ethnomusicology. In 2008 she earned her BA from Bard College and was awarded the Franz Boas Ruth Benedict Prize for her thesis The Dancing Crowd an ethnographic essay examining the dance and music culture of the "ethnomesh" scene in Manhattan's Lower East Side. Since 2009 MacKenzie has been pursuing non fiction cinema, working on several short films. The Best Thing I Ever Done is M. Emily's directing debut, In 2010 she earned her Graduate Certificate in Documentary Media Studies from The New School University.

Director M. Emily MacKenzie and Producer Jeremy Scott Cohan will be available for Q&A after the screenings, and Domenico DeMarco and his two daughters, Margaret and Louisa, will be attending the June 7th screening.