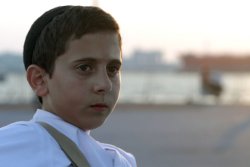 'David' tells the story of Daud, an eleven year old religious Muslim boy growing up in Brooklyn. Concealing his Muslim identity, Daud inadvertently befriends a group of Jewish boys who through a haphazard sequence of events mistake him for being Jewish and accept him as one of their own. A genuine bond of friendship is formed between Daud and Yoav, on of the Jewish boys; Daud experiences a sense of freedom, joy, and camaraderie that he has never felt before, and for a brief time enjoys being a carefree eleven year old Brooklyn boy. When the Jewish boys discover Daud's true identity, Daud's world is shattered and he is left alone, struggling to come to terms with his place in the world.

Joel Fendelman has spent the last 7 years in Brooklyn producing and directing award winning films. His feature debut documentary "Needle Through Brick" won the Silver Palm award at the Mexico International Film Festival. In developing the script for "David", Joel spent a year immersed in both the orthodox Jewish and conservative Muslim neighborhoods of Brooklyn. The two lead actors are kids from the neighborhood and the film was shot entirely in Bay Ridge and Borough Park. Based loosely on Joel's experience of growing up Jewish in Miami "David" was created with the intention of exploring themes of identity and the struggle to fit in.

Director Joel Fendelman will be available for Q&A after the screening.