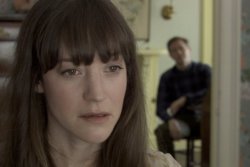 After her father passes away, Camden discovers she has an illegitimate half sister: Alice. The two couldn't be more different; but Camden is confident that the two of them are destined to be great friends. Alice on the other hand, is not quite convinced. In an effort to bond, the sisters and their significant others take a trip to Lionshead, the family estate in Massachusetts where tensions build and ultimately explode.

Anna Kerrigan is a screenwriter, playwright, and director based in New York City. Her play The Talls will premiere off-Broadway at Second Stage in August 2011. A graduate of Stanford, she received the University's Robert Golden Medal Award for her thesis production The Poor, which she wrote under the mentorship of Artist-in-Residence Cherrie Moraga. Anna has been a member of Ensemble Studio Theater's Youngblood Playwrights group for promising playwrights under 30 since 2009. She is currently developing multiple screenplays, plays and a TV pilot. "Five Days Gone" is her first film.

Director Anna Kerrigan will be available for Q&A after the screening.