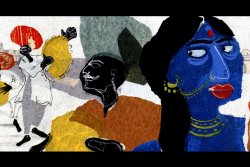 Ines travels to India to visit her friend amar, who has been living in a mental institution for years. Ines remembers the last days they spent together and her promise to return.

Isabel Herguera discovered animation thanks to a friend who showed her how to work a Bolex camera and gave her his animation equipment. Since then, she has been imagining stories that take place in different parts of the world, on stages that always fit in her luggage. For years she worked in different animation studios in Los Angeles, USA. In 2003 she returned to Donostia and since then manages ANIMAC, the International Animation Film Festival of Catalonia in Lleida, and gives classes on animation in India, where she escapes to whenever she can to draw in her old notebooks, especially in train stations and bus stops.