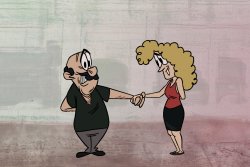 SHE WAS THE ONE

In 2005, StoryCorps, the Peabody-winning oral history project, began a special initiative to honor and remember the stories of survivors, rescue workers, and all those most personally and immediately affected by September 11th, 2001. In our latest animation, Richard Pecorella remembers his fiancee Karen Juday, a secretary for Cantor Fitzgerald, who was killed in the World Trade Center attacks.

Directors Mike and Tim Rauch AKA The Rauch Brothers are best-known for their work directing the animated series StoryCorps, airing on PBS' flagship documentary program POV. In 2007, they formed Rauch Brothers Animation to produce independent animation and commercial work that entertains, inspires, and informs. Their clients range from Sesame Workshop's The Electric Company to corporations such as Mountain Dew. The Rauch Brothers are currently developing a feature film telling the story of Puerto Rican migrants in New York City during the 1950's.