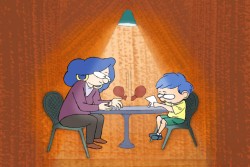 In February 2006, 12-year-old Joshua Littman and his mother, Sarah, recorded an interview at StoryCorps. Joshua was diagnosed with Asperger' Syndrome, a form of autism, when he was 5 years old. His mother describes it as being "born without social genes". Kids with Asperger's have a hard time socially, and can have obsessions- for Joshua, it's animals. Most StoryCorps participants use a list of suggested questions, but Joshua wrote his own. The conversation they provoked covered everything from cockroaches to Sarah's feelings about him as a son.

Directors Mike and Tim Rauch AKA The Rauch Brothers are best-known for their work directing the animated series StoryCorps, airing on PBS' flagship documentary program POV. In 2007, they formed Rauch Brothers Animation to produce independent animation and commercial work that entertains, inspires, and informs. Their clients range from Sesame Workshop's The Electric Company to corporations such as Mountain Dew. The Rauch Brothers are currently developing a feature film telling the story of Puerto Rican migrants in New York City during the 1950's.

Sacha Evans of StoryCorps will be available after the June 14 screening.