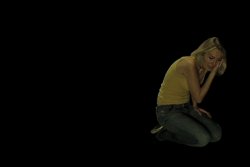 A psychoanalytical drama film about the audition of a young actress; creating an allegorical scenario.

Having studied film, multimedia and philosophy, Thierry Loa is an interdisciplinary film and multimedia director, writer, producer, and thinker. In 2008, he wrote and directed an interactive film 'Come to the Secret Location' which received great recognitions such as Finalist in Best Film/TV site at the SXSW festival and Gold Award in Flash Narrative at FITC. His latest short film 'The Audition, X2.90907' (2009) won Best Film in the experimental category at the Moving Image Film Festival. He is currently working on a cinematic-ethnographic feature film titled '20-22: Society of the Spectacle,' amongst other film and new media projects.

Writer/Director Thierry Loa will be available for Q&A after the screening.