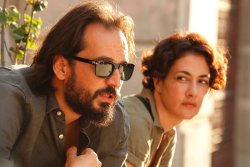 A massive explosion rips though a busy street in Istanbul, Turkey. 95 people are dead; 30 Americans and 5 British. The massacre sends shockwaves from Turkey to London and Washington, DC. A new terrorist organization is behind the attack. The explosion is just the beginning.'Labyrinth' is the code name of the operation conducted by Turkish intelligence to stop a second, more devastating attack that will plunge Turkey, the only democratic Muslim country in the region, into chaos and destroy the fragile balance of the Middle East. After the initial attack, Turkey becomes a battlefront for terrorists and Turkish, British and American intelligence officers. Everyone has his own agenda in the fight that stretches from Istanbul to Eastern Turkey and from Frankfurt to Northern Iraq. The story revolves around a group of Turkish intelligence officers and their race to stop the terrorist organization. The group is led by Fikret, a veteran with nothing in his life but his career, and Reyhan, one of the best field operatives in the country who's also a single mom trying to balance her family life with a career in the shadows. Despite Fikret's reluctance to admit it, their common struggle and hardships bring them closer.

Tolga Ornek, gained international reputation with his docu-dramas; "Ataturk", "Mount Nemrud", "The Hittites" and "Gallipoli". In 2008, he released his first feature film, "Cars of the Revolution", a film on the true story of 1961 to produce the first Turkish car. The film has been received by great critical acclaim and has won awards. Ornek's next feature film "Losers Club" was released March 2011 and drew in 485.000 viewers. This film was inspired by a radio show from the 90's, which became a cult with breaking all the rules of conventional broadcasting. Ornek's third film "Labyrinth", which was supported by Eurimages, Turkish Ministry of Culture and HessenInvestFilm, is released December 2011 in Turkey and several countries of Europe. This film has also been received by great critical acclaim.