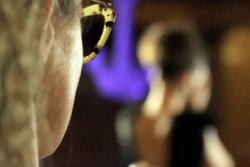 In this contemporary film noir, an elegant crew of female creatures emerges insect-like from portals on board a ship anchored in a tropical sea, their faces obscured from view. The beings sashay like 40's femme fatales, bearing sunglasses which conceal all but the fluttering of their false lashes as a new language is revealed, a Morse code of clicks and vibrations which underscores their private fantasy world of desire and spiritual escapism. Entombed aboard this luxury modernist boat, the female chrysalides prepare for their strange metamorphosis, symbols of evolution, transcendence and escape from the material and ephemeral.

Born in 1966 in Salta in the North of Argentina, Lucrecia Martel settled down in Buenos Aires where she studied communication sciences. She started by directing a few shorts among which Dead King (1995), which garnered several awards in the international film festival circuit. From 1995 to 1998, she made a series of documentaries for TV as well as a children's TV programme, hailed by the Argentinian press for its unusual dark humor. From 2001 until today, Lucrecia Martel has managed to make three very personal feature films, The Swamp (2001), The Holy Girl (2004) and The Headless Woman (2008), in which she explores her favorite theme, troubled minds.