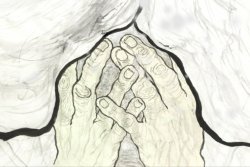 HUR Bum-wook Born in Seoul in 1983. Graduated from Korean Academy of Film Arts, Dept. of Animation Directing in 2011. In 2002, The first time watched a short animation films. Film is Peter Foldes's La Faim(Hunger). have dreamed Animation director of since then. Is currently directing a feature-length animation. Is scheduled for release in 2013.

A deep emotional scar can never be cured or forgotten. You just have to accept the fact and bear it. That's why it hurts all the more.