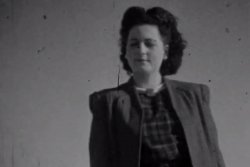 This experimental work is about the appearance of 'ghost images' in old 9,5mm super 8 and 8mm films. The images you can see here are a part of the Centre Image's public collection of films. I spend weeks to locate into the entire collection, about 8000 archives films, a selection of fifty minutes of 'ghost images' ('images fantomes' in french). These kind of images can be seen when there is too much light or in the opposite way, when there is not enough light for the camera. Or when the roll of film is damaged. Or when you can see the perforation before the image. In these case, the results are involuntarily aesthetically ... These kind of images are uniques and full of mystery. Sometimes you can't say where or when you are, and who you look at... Sometimes you just see faces, or shadows, shapes... For me that was the most interesting thing in this experimental work... Music by Bastien Stroppa. Thanks to him, great song...

Fourquet Gregory is a 36 years old editor and director. After higher education in letters Gregory choose studying cinema in Paris. He has been working for ten years as an editor on documentaries, motion graphics and experimental movies. The documentary "Le reve d'Adrien" (2009) was his first film followed by "Images Fantomes".

Director Gregory Fourquet will will be available for a Q&A after the screening on Saturday, June 9.