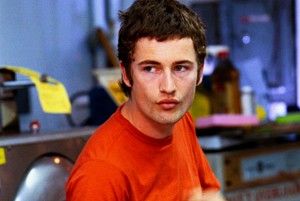 The Gentle Cycle is a moving tale about a streetwise laundromat attendant who befriends a customer in need. It pulls the viewer into the surreal, drone-like world of a laundromat-spinning elements of suspense, mystery and compassion into a strangely satisfying surprise ending. Emmy Award-Winning Director Peter Nolan makes his cinematic debut with this short film that provides an endearing and searching look into the power of goodwill.

Award-winning television Director Peter Nolan makes his film debut with The Gentle Cycle. Peter has developed his unique style and technique in a variety of formats from gritty documentaries to music videos. He drew upon his speed and know-how from his documentary work in order to direct this film in just one shooting day. Peter is currently a Camera Operator on Sidney Lumet's dramatic television series 100 Centre Street, shooting in HD24P. Among Peter's six Emmy Award-winning projects is the television documentary, Underground in Alphabet City with Edward Asner; about the plight of squatters living in New York City's Lower East Side. He has directed entertainment segments for television specials and has also directed and photographed music videos for eclectic artists from Trinidad to New York.